Among fortresses, castles and legends.

CALDAROLA. The Caldarola Castle, charming residence in renaissance style and property of the Pallotta counts, was established before xi century at the foot of the Colcù hill and then modified at the end of the 1500. 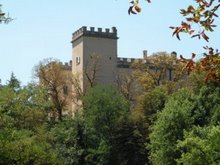 CASTELRAIMONDO. The Giustiniani di Lanciano Castle was established on commission by Giovanna Malatesta about the end of the fifteenth-century and is surrounded by a secular park. On the interior you can visit the “Maria Sofia Giustiniani Bandini” Museum..

TOLENTINO. The Rancia Castle, majestic and suggestive, dominates the valley on the left side of the Chienti river. It was established in the middle of the XIV century on the structures of the preexistent Cistercian “grancia”, property of the near Chiaravalle di Fiastra. On the inside, it is possible to visit theCivic-Archeological Museum dedicated to Aristide Gentiloni Silverj.

URBISAGLIA. The Fortress of Urbisaglia, in good state of preservation, was established between the middle of the XV century and the beginning of XVI century. It has a trapezoidal plan with four solid angular towers and offers suggestive panoramic views on the near valleys and on the Sibillini mountains. 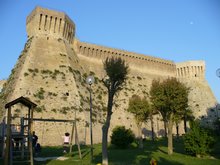 ACQUAVIVA PICENA. The Acquaviva Picena Fortress is a majestic fourteenth-century fortress and founded by the powerful Acquaviva family. On the inside, it is set up an Old Weapons Museum. 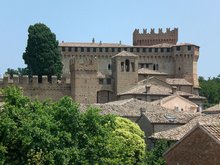 GRADARA. The Gradara Fortress rises on a hill at 141 m. above sea level: it is possible to have an overlook until the Adriatic Sea to the north, or to the Carpegna Mountain to the west. The fortress framed – according to some historic theories – the tragic love between Paolo and Francesca, sang by Dante in the Divina Commedia.

OFFAGNA. The Offagna Fortress, building of a great fascinating effect, was established between the Middle Age and the Renaissance. It represents one of the best examples of fortifications in the Marche, remained almost intact through more than five centuries. Currently the fortress hosts a museum of old weapons with an appropriate section dedicated to hunting. In July, the fortress becomes theatre of a medieval celebration, which animates Offagna for two weeks.