The Tourist Guides of Macerata by Marche will take you on a guided tour to the city of Macerata for admiring its beautiful sites. 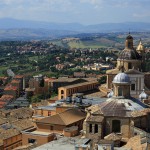 Capital of the Province, the town of Macerata conserves its beautiful historical centre enclosed by its defensive walls. Dubbed “the Athens of Marche”, Macerata is a centre of exceptional artistic and historic interest, especially rich in Renaissance and Baroque architecture. Site of an ancient Studium Legum, today the town boasts an important University where high-quality professors and renowned exponents of Italian culture have all contributed to its prestige.

To visit with tourist guide of Macerata: 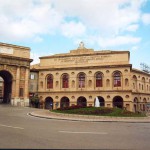 This is the most characteristic and representative monument in the town. Designed by the architect 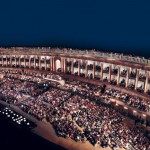 Ireneo Aleandri and built between 1820 and 1829, thanks to the contribution of a hundred well-off Macerata citizens, who had the intention of donating a new building for public events as is recalled on the façade; it was the first modern sports venue in the Marche Region, specially planned for the so-called Gioco del pallone col bracciale, (i.e. a ball game similar to ‘pelota’) which was very much in vogue in the mid-19th century. It is a majestic construction perfectly integrated into the urban fabric of Macerata. With its excellent acoustics, nowadays this complex functions as an open-air theatre for the prestigious summer opera season of the Macerata Opera Festival as well as for various concerts.

The Cathedral of San Giuliano 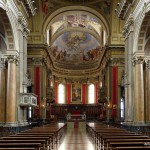 Dedicated to the Patron Saint of the town of Macerata (Saint Julian the Hospitaller), also venerated in Paris in the Church of Saint-Julien-le-Pauvre. The present-day church was built in the 18th century designed by Cosimo Morelli. The most interesting part of which is the external apse made in fired bricks, which testifies to a clever architectonical structure suiting the slope of the land. The inside, in the neo-16th-century style, we see a Latin cross structure, a central nave and two lateral aisles, which are punctuated by and coupled with Ionic capitals. Rich in works of art, it also displays a noteable triptych by the artist from Fabriano, Allegretto Nuzi. 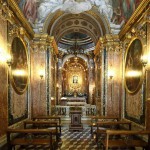 Considered as being the smallest Basilica in the world, the Basilica della Madonna della Misericordia has its origins in an ancient chapel which was erected in just one day, in August 1447, as an offering against the plague. Designed by the architect, Luigi Vanvitelli, the Basilica was rebuilt during the first half of the 19th century and redecorated by Francesco Mancini and Sebastisano Conca, with stories relating the life of the Virgin Mary in a measured, 18th-century style. Vanvitelli, here, accomplishes the great endeavour of enclosing into a small space an area of splendid forms, rich in light, with: frescos, multi-coloured marble as well as stucco works. Later, the frescoed ambulatory in 1921 by the famous artist, Biagio Biagetti depicting scenes of the life of Mary and Jesus, with modern intrusions in Art Nouveau was added. The Sanctuary contains the Renaissance venerated image of the Virgin Mary of Mercy, who has always been thought of as protector of the town. 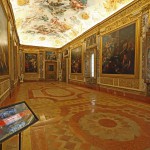 In the heart of the town appears this 18th-century noble house, desired by the Buonaccorsi family after they had risen to the ranks of town nobility in 1652 and built by the architect, Giovan Battista Contini. Property of the Municipality of Macerata since 1967 and home to the Academy of Fine Arts until 1997, the Palazzo Buonaccorsi today plays host, in its sumptuous rooms, to the town’s collection of both ancient and modern art. Inside, 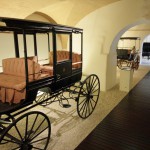 the splendid, pictorial Salone dell’Eneide (Aeneid Room) decorated by a series of grand paintings dedicated to the poem by Virgil (the work of masters of Naples, Rome, Venice and Bologna) as well as a cycle of frescos that covers the ceiling vault. The splendid decoration is among the most lavish and sublime examples of Rococo. There is, within the more evocative rooms of the ground floor, the Museo della Carrozza, which gives us a precious collection of carriages which came to the museum following the important bequeathal of Count Pieralberto Conti and, upon his example, by various wealthy families of the surrounding area. Not to be missed, is an unusual virtual trip by carriage through the ancient villages of the Macerata countryside. 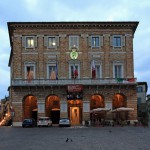 The heart of town life, is the piazza where the most representative buildings appear: the 19th-century Palazzo Municipale(Town Hall building); the elegant Loggia dei Mercanti, an excellent example of Renaissance architecture joined to the imposing Palazzo della Prefettura; the Clock Tower, the neighbouring historical Lauro Rossi Theatre and the University of Macerata, building, which was founded in 1540. The piazza, notwithstanding current buildings of differing eras and styles, however maintains a harmony and homogeneous quality all its own, thanks to the rich use of fired brick which displays its characteristic red-brown shade. 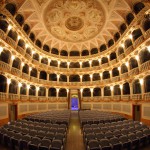 Designed by the famous theatre architect from Bologna, Antonio Galli (Antonio Bibiena), this enchanting jewel of the Baroque was built between 1765 and 1772, thanks to the finance of a group of Macerata noble families, and which was then partly modified by the architect, Cosimo Morelli. It is among the first examples of an Italian theatre, and it has a large and elegant bell-shaped auditorium with its three levels of boxes and upper gallery. Ever since 1884, it has been dedicated to the Macerata musician, Lauro Rossi. 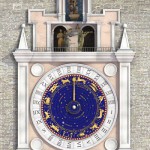 The first building phase of the Clock tower goes back to 1492 (designed by Matteo d’Ancona). The work continued throughout the 16th century and it was completed in 1653 by the architect, Galasso Alghisi da Carpi. At the base of the tower, once an automaton clock was installed with statues depicting the Three Wise Men. When the clock sounded the hour, the mechanism devised by and produced by the Ranieri brothers from Reggio Emilia in 1569, set the Wise Men moving in adoration of Baby Jesus, found in a niche together with Our Lady. The original automatons, in multi-coloured wood, are now kept in the town Art Gallery. Today, following detailed study, the old astronomic clock has been refurbished in all its splendour, with the ancient mechanism and original automatons substituted by faithful copies. From its 64m height, we can enjoy a gorgeous view, which spans from the sea to the Sibylline mountains, over the hills of the Macerata countryside.

Palazzo Ricci is one of the most important noble homes in the Province of Macerata. It was built in the second half of the 16th century and then underwent refurbishments throughout the course of the 18th century. Its spaces decorated with period furniture, play host to Museo Palazzo Ricci – Arte Italiana del Novecento (the Palazzo Ricci Museum – 20th-century Italian Art), a prestigious collection of paintings and works of art by the most famous Italian artists. The collection displays significative and representative works by the most important avant-garde schools and currents of thought of the 20th century, including the most recent trends in art; while the wonderful underground vaults complete the guided tour and which are open during exhibitions of great cultural worth.

The Church of Saint Philip 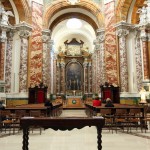 A true masterpiece of Baroque art, the work of the architect, Giovan Battista Contini, a disciple of Bernini, the building was begun in 1705 and finished in 1730 by his student, Sebastiano Cipriani. The bright elliptical interior is characterised by a sumptuous covering in multi-coloured marble and stucco work which even decorate the altars, dominated by imposing paintings on canvas by famous artists of the time, like: Francesco Mancini and Marco Benefial from Rome. Characteristic are its two bulb-like towers which are erected to the sides of the uncompleted façade.