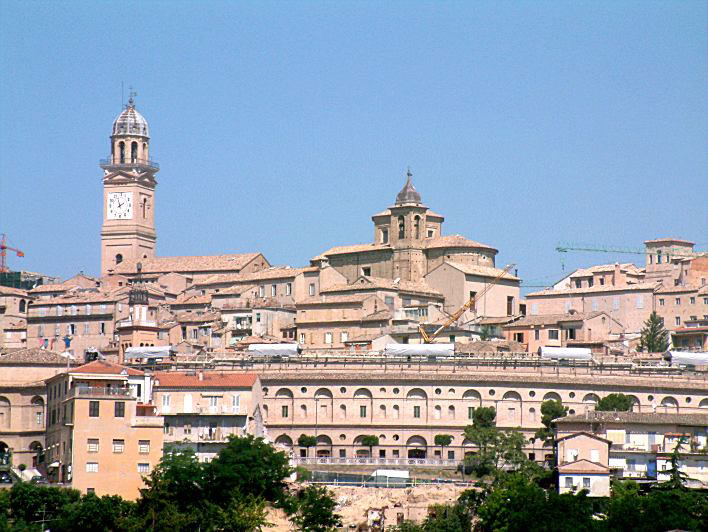 Macerata is one of the typical small towns of our region; it lies on a hill dominating the two valleys of the Potenza and the Chienti rivers.
Its foundation dates back to 1138, the year when the Podium Sancti Juliani, (i.e. a village with a parish church), united with the Castrum Maceratae, (i.e. the Castle of Macerata), into the independent Municipality of Macerata.
During the 13th and the 14th century the new town expanded its territory by means of annexations of nearby castles. In 1320 Macerata received the title of Civitas (City) and became seat of a diocese and of papal governors (‘Rettori Pontifici’).

In the 15th century the town fell into the hands of Francesco Sforza (1432-1442), then it returned under the Papacy that elevated Macerata to the permanent seat of the Ancona March Legation; Macerata also became the principle town of the Ancona March, i.e. one of the regions forming the papal State.

During the 15th century Macerata was severely struck by frequent outbreaks of plague that stretched its population to the limit. During one of these terrible epidemics the inhabitants erected a chapel dedicated to the Madonna of Mercy; later it was rebuilt following the plans of Vanvitelli; nowadays this church is a true jewel of our town.

During the same period, there was great building fervour which saw the construction of the new Cathedral, the refurbishing of piazza del Duomo, the beginning of the building of the Town Clock Tower and the Saint Francis Cloister.

The 16th century is considered the golden period of Macerata which witnessed the official recognition of the university, the opening of present-day Piazza della Libertà, the construction of various buildings among which we find the Loggia dei Mercanti as well as the city walls by Cristoforo Resse, a student of Giuliano da Sangallo.

The following centuries register, on the contrary, a time of regression and lack of movement in may senses. Rome became the focal point of all power depriving all peripheral elements, which included Macerata, of any type of political or administrative function. The local nobility, excluded from power, focused its attention on greater care of its image by constructing sumptuous residential buildings and Palazzo Buonaccorsi is an excellent example of this.

At the end of the 1700s, the Napoleonic invasion of the Papal States brought violence and abuse of power throughout the land; then followed the formation of the Roman Republic, within which the city was elected the main town of the Musone department.

1800, with all its aspirations to freedom, lead to the founding of a local Carbonari movement which, following some awkward attempts of uprising, lead Macerata back under the domination of the Church until the battle of Castelfidardo in 1860 that heralded the birth of the Italian State.

Today, Macerata is a small town of approximately 42,000 which rises to 315m a.s.l. It is the Provincial Town, which covers 57 Municipal Zones, and is characterised for being a city of services whose historical cultural vocation, which has conferred the name of “the Athens of the Marche” on it, sees to it that there is a definite cultural vivacity by way of its two theatres, the Sferisterio Arena (a magnificent, Neoclassical open-air opera theatre), as well as by its “Lauro Rossi” theatre (for its season of prose theatre), by the activities organized by the University and the initiatives of cultural associations in the town itself.